News from the Land of Freedom 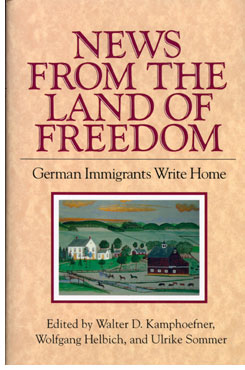 "Oh blast it, I forgot to tell you what wonderful fruit there is in Kamerika, every day we eat peaches, melons and bananas," a young woman working as a cook in a wealthy Brooklyn household wrote to her friend in Germany in 1884.

"And then I also wanted to tell you if you have an old shoe or boot, don't throw it away, tie a red or bleu bow on it and hang it on the wall in your room. You may think I'm crazy, but you ought to know, dear Marie, that here in America, that's what they call an antique."

From Cincinnati, Milwaukee, Pitsburgh, and St. Louis, and from isolated frontier farms, newcomers to America wrote back home, capturing in their individual voices the experience of adapting to a profoundly different culture. Here for the first time is a broad cross section of German immigrant letters - some 350 - arranged in 20 different series composed by one indivudal or family group, some spanning a couple of years, some half a century.

"If you think I made a mistake by immigrating here, they you are mistaken", writes a man to his brother.

"The difference in way of life between here and there is so great, it is impossible to compare the two", writes another. And he adds: "Things here are quite different from there, here it doesn't matter who you are, here everyone's equal, here the banker knows the beggar."

Although ties to the homeland remain strong, one correspondent says, "I am proud of my German heritage, but American from head to toe".

Along with praise for their new country, the immigrants relate stories of hard luck, pain, failure, and disillusionment. "You at least have a pension," writes a socialist to his brother. "Here you get a kick in the backside when you are old. A disgrace for the richest country in the world."

The letter-writers span the social scale from university graduates to the illiterate, from miners and domestics to wealthy businessmen and public officials. With a down-to-earth conreteness and spontaneity, their letters give rare glimpses into the thoughts and feelings of the inarticulate and uneducated. They include a variety of religious - and irreligious - views, and cover the entire political spectrum from sympathy for the Kaiser to socialism, from apathy to activism.

The product of a five-year transatlantic collaboration, the book was first published in German in 1988. The editorial team has researched the background of individual wrtiers on both sides of the Atlantic and provides informative introductions that place th eltters in context.

An ideal choice for German-Americans who want to know more about their roots, this engaging book will provide rewarding reading for anyone interested in American social history.