Germans in the Civil War. The Letters They Wrote Home 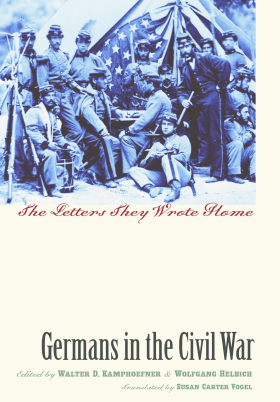 This edition ... presents an anthology of hitherto unpublished letters written by German immigrants from Civil War America, mostly to relatives and friends back in the Old Country. Selected from the holdings of the North America Letter Collection, or NABS, in Gotha, Germany, it includes the writings of soliders and civilians, mena and women, North and South. This ethnic component of the Civil War has largely faded from public memory, and it has been seriously neglected by scholars as well.

German Americans were one of the largest immigrant groups in the Civil War era, and they comprised nearly 10 percent of all Union troops. Yet little attention has been paid to their daily lives - both on the battlefield and on the home front - during the war: This collection of letters, written by German immigrants to friends and family back home, provides a new angle to our understanding of the Civil War experience and challenges some lang-held assumptions about the immigrant experience at this time.

This collection is the first to present a cross-section of German immigrant writing from Civil War America. More than three hundred letters written by seventy-eight German immigrants - man and women, soldiers and civilians, from the North and South - are included here. Their missives tell of battles and boredom, privation and profiteering, motives for enlistment and desertion and for avoiding involvement altogether. Coming from a variety of backgrounds, these men and women convey an array of German American opinions of the war and the related issues of slavery and race. Nonetheless, they describe the conflict from a distinctly German standpoint ... casting doubt on the claim that the Civil War was the great melting pot that eradicated ethnic antagonisms.

The conventional wisdom of historians is challenged at a number of points by these letters. It becomes clear, for example, that immigrants' opinions on American issues were closely tied to their democratic aspirations for Germany and the rest of Europe. Ordinary immigrants speaking in their own words provide evidence that the republican and egalitarian ideology manifest in the 1848 Revolution extended farther down the social scale than previous scholars have realized. Particularly among recent arrivals, however, Union enlistment often had purely economic motives. There were some divergences in attitudes beween Protestants and Catholics, but they were far from absolute. One striking contrast did come to light: the nearly unanimous and indiscriminate adulation of immigrants for German generals and the valor of German regiments - whereas American officers, soldiers, and newspapers usually held to diametrically opposite opinions, seeing only incompetent polical generals and cowardly "flying Dutchmen" in battle.

These letters thus cast doubt on the venerable and conciliatory claim, made by contemporaries as well as many historians, that the Civil War was the great "melting pot" that eradicated nativism and ethnic prejudice - on the part of both Germans and AngloAmericans - as natives and immigrants stood shoulder to shoulder and shed their bood together in a acommon cause.